Over the last two years or so, our hardworking UKPMC development team here at the British Library have often been asked 'why are you developing a UK PubMed Central?' There are a whole series of answers to this, but I outline two below which are quite wholesomely toothsome.

Firstly, the UK's eight largest funders of biomedical and health research (http://ukpmc.ac.uk/Funders/) encourage all the recipients of their grants to publish in Open Access… Continue

Open Book Publishers has two titles, recently published,
of interest to those participating in Open Access Week.
Each book is available completely for free; Open Book has
a strict peer review policy.

Washington, DC – Today marks the start of Open Access Week 2010, as thousands of scholars, faculty, and students in nearly 90 countries worldwide participate in events to raise awareness and advance understanding of the benefits of Open Access (OA). The week features the voices of top researchers who have stepped forward with first-hand accounts of how Open Access to research has positively impacted them and their ability to do their work. In opening remarks… Continue

Welcome to the DOAJ blog!…

OA Week at the University of Fribourg (Switzerland)

At the University of Fribourg Switzerland, the University Libraries and the Fribourg
County Library (BCU-KUB) are co-hosting this year's open access week events.
We're getting the word out about open access and it's impact on faculties.
Included in our plans is a panel discussion entitled "Open Access: What
You Should Know" and flyers encouraging them to use the University’s
institutional repository RERO DOC (… Continue

One of the events planned for OA week at the Queensland University of Technology in Australia is the lauch of an 'Eprint Competition' that will be open to all academic staff and research students. At the end of the competition period, there will be prizes awarded based on number of full-text items deposited. There will be additional prizes for best anecdotes about how the University's repository has helped. This week, QUT will also be hosting two Open… Continue

Open Access - A Trialogue between authors, publishers and librarians

In November in Melbourne, Australia. See the blog site at http://openaccess.caval.edu.au/

(This is my 1st blog post here, so please excuse some formatting… Continue

Welcome to the DOAJ blog!

The e-ciencia open access project -in which public regional administration, public universities in Madrid and the Spanish National Research Council (CSIC) cooperate for promotion of open access and development of IRs- is organising a set of activities for OAW2010, http://bit.ly/d3Hqz1 (English version).

The African Journal Archive is pleased to be able to support Open Access week (18-24 October 2010). The project is collecting journals published exclusively in Africa and about Africa, with a focus on the Sciences, Social Sciences and Humanities. The Archive contains issues digitised retrospectively back to the first issue The…


Present for each researcher who deposits to our IR in OA week ;-) 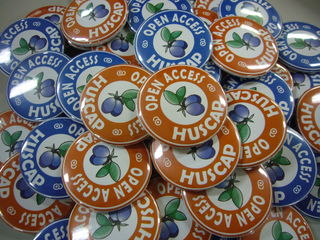 DRF OAW Campaign throughout the OAWeek

THERE ARE 1,000 MEMBERS OF THE OPEN ACCESS WEEK NETWORK!

It's wonderful to hear about the OA Week plans underway around the world!

At Brandeis most of our effort this year is focused on raising visibility/awareness of the OA movement in a way that is reasonably low-impact in terms of staff time commitment. Mainly we're investing our energies into a promotional blitz.

We are planning a few events, such as hosting a BibApp demo (a joint effort with the Boston Library Consortium and MBL-WHOI), offering an authors' rights workshop… Continue