(This is my 1st blog post here, so please excuse some formatting issues) 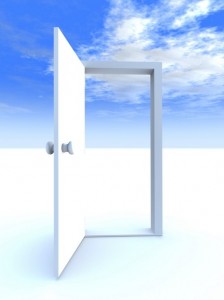 This is a personal blog which is completely unrelated to any of the writers’ formal activities with any of the organisations that
they are associated with.

Here is a report in relation to my attendance of a recent Conference.

Personal mission INCLUDING raising awareness about Open Access/archiving to the delegates present.

As this analysis is written post conference – let’s start from the beginning, without reflection. To me, I think this remains a good example for others, so my note is comprehensive in nature. Parameters
are likely to vary but some commonalities will/may remain.

1) I was formally in attendance at this event and the organizing committee waived registration costs for all family members attending such as myself. I also was lucky to have had the cost waived for the Gala Dinner

2) Since I had no *Paper* documentation about IR’s/self archiving, it was impossible on this occassion to physically distribute information in this regard. I did however mention DEPOT/eprints/ROAR/ROARMAP etc. etc.

Since I had never been to such a large conference before, it took some time to take everything in. Given the approximate number (~ 800), clearly, it would not be possible to cover OA/IR’s with many on a one-on-one basis as originally planned. Having unfortunately previously *lost* my short podium slot, I started to consider other methods of getting my message across (second passage). Thankfully, with “Research Made Public” brazened on the front of my t-shirt all that day, this set the tone. A large proportion of delegates noticed this and I was the only person present with any *message carrying* clothing on that I was aware of.

Having never seen a *poster session* before, I thought this might be a good opportunity. Of the ~ 150 posters, hardly any of the researchers involved were standing next to them as I would have thought
would have been the case during poster sessions. You live – you learn.

I had to return home with my packs of OA promotional material completely intact.

I chose my “I’m Open” t-shirt for day 2 since it was a much more visible and striking one. More familiar with the surroundings/set up, I noted that there was a 2 hour lunch/poster session which appeared to be, on paper at least, the best time to swoop into action. One hour in though, the only manned booths were commerce diagnostic related – so I had to quickly think of something else. Gut reaction in most situations is always useful but not 100% specifically correct.

Since I clearly couldn’t “post” on posters, I rapidly started to leave some basic “Open Access” posters and postcards on the tables where all the delegates were in discussion with one another. Process took only a few minutes and then *I vanished*.

The ~ 950 were all on the lower floor with only two means of exit to ground level:- stair or escalator. I decided to leave a trail of the same “Open Access” postcards meaning that almost all (delegates) of them would see them. Precision timing (v. important) meant that by the time they were noticed by staff their purpose had been fully served. On the tables on the ground floor, I chose to leave some more of the same posters along with a few dozen DOAJ postcards. Again, this process was most swift.

To a smaller extent, a few seeds were dropped up to level 3 where the main auditorium is situated. Whilst not a watch wearer, I had around 40 minutes left before the empty auditorium (other than one lone delegate) was filled again. I still had ~ 800 leaflet/poster/postcard & misc. items left. Within 20 minutes, I managed to place *something* on ~ 800 seats/armrests. Armrests are great since they cover two seats at once. I left out most end of row seats in case such items simply got bumped to the floor.

A trickle of delegates started to arrive just as I was finishing so *I vanished* again.

Delegates were arriving in droves now. Time to nip outside for a quick cigarette (filthy habit).

Upon my return, I could see hundreds of delegates reading/looking at what had *appeared* whilst they were away. The conference was now split with a sub-conference in a much smaller suite. The content of the smaller session was quite specific to a topic of personal interest. When I returned to the main auditorium, without invasively *snooping around* mid-session, it was impossible to judge how much material was likely to be taken away by the delegates – we’ll never know. Bearing in mind the earlier seeds though, I remain hopeful. At the very least, they will have been looked at/read. 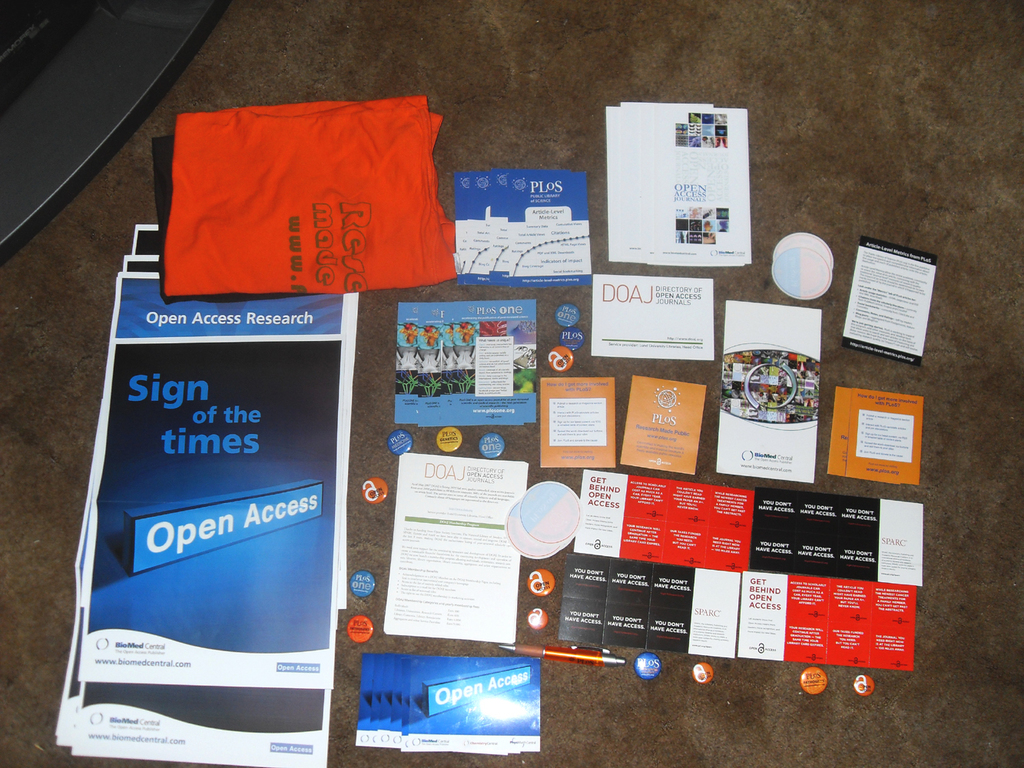 Similar pcture of the material on display that day

Since the entrance area to both suites was quiet – I set up an “Open Access” stall on the most prominently placed empty (nice fluke) table. One of the most eye catching *goodies* I had was the blue/silver PLoS goblet which I proudly placed at the centre of *my stall* which contained a broad selection of what I had left. I also left a couple of our glossy “CJD Alliance” ring-bound *brochures* briefly on display so that passers by got the connection to what I was doing. It was cool to sit at *my stall* with the ever so fitting “I’m Open” message across my chest.

I then *vanished* again.

My *activities* calmed down during afternoon tea/coffee break. My final activity was to clear my stall and then stick up a final “Open
Access” poster on the back of the prominently placed entry sign to the
main auditorium. This meant that when all left it that day, they had
their final reminder.

All took the evening off to attend the Gala Dinner/Ceilidh at the rather grand venue.

Despite my *unconventional methodologies*, I achieved much more than I set out to do. At a rough guestimate, I would say that > 60 % of
the delegates fall into the age-bracket that are much more likely to
seriously consider choosing an OA Journal/Publisher as matters stand.

We now know that this was the largest ever conference in this particular field with ~ 950 delegates present.

Of those that I was able to discuss OA/IR’s with, almost all of the feedback was positive in nature. I was easily able to respond to any
less positive feedback.

A large proportion of these delegates are involved in STM research generally so any knock-on effect applies across the board.

Actual cost for me to participate in this instance = ~ £35

I would like to equally thank DOAJ, Biomed Central and PLoS for kindly supplying me with all of the OA promotional material. I
also wish to thank a number of contacts from the OA Movement, friends
and colleagues for their full support and excellent advice ahead of the
event itself.